16 Functional Programming Languages to Learn in 2022 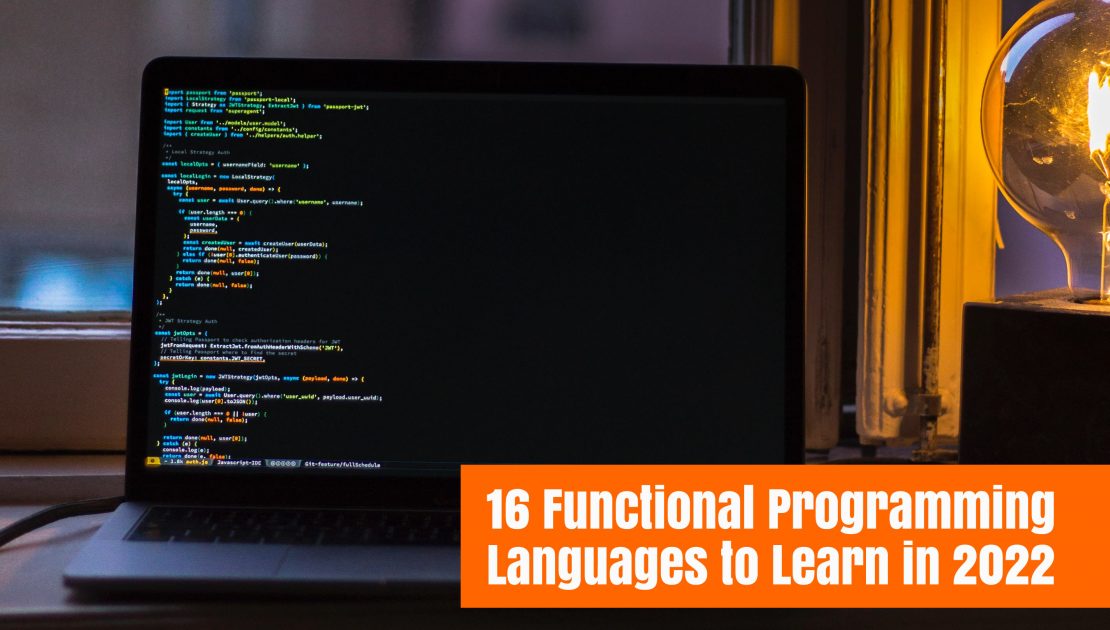 16 Functional Programming Languages to Learn in 2022

Pure functions are not allowed to change their state which is exactly opposite to the OOP.  Object-Oriented Programming (OOP) is about having a relatively fixed set of functions, and you’re primarily modifying or adding new variables. Any method can mutate the state of the objects. Pure functions are also proven best for concurrency as there is no shared state between functions.

Functional programming is great for data analysis and machine learning. Programmers are falling in love with it because of powerful features such as –  no nulls, higher-order functions, no exceptions for error handling, immutable data structures, pattern matching, and function composition operators.

Here’s a list of 16 most popular functional programming languages you can learn.

Elixir is the most popular programming language in the world. It is a functional, general-purpose, and concurrent programming language that runs on the BEAM virtual machine. It is popular for its suitability to build low-latency, fault-tolerant, and distributed applications.

Elixir is built on top of Erlang and uses features of Erlang, Ruby, and Clojure to become a high-concurrency and low-latency programming language. It is used by world-recognized companies that serve millions of people concurrently such as Discord, PagerDuty, Pinterest, Bleacher Report, Inverse, The Outline, and so on. It was created by José Valim whose goals were to create a language that can be used for large-scale sites and apps.

It is designed to handle large data volumes at speed and because of its capabilities. Elixir is mainly used in telecommunication, eCommerce, and finance industries. It is a very pragmatic language. Phoenix is a development framework written in Elixir which is popular for its great performance.

It is superior for reliability and concurrency as it builds on top of Erlang. The community and the core Elixir team are putting their best efforts into the Elixir ecosystem which is a combination of high-quality libraries, forums, and skilled professionals.

It is a great language to start learning functional programming, try it!

Do you know? Erlang is used to code WhatsApp. Erlang is a general-purpose, concurrent, functional programming language, and garbage-collected runtime system. It is specifically designed for concurrency, distribution, and fault tolerance. It is suitable for building distributed, real-time, and concurrent systems such as telecommunications, database applications, servers, and highly-available systems.

Erlang was originally proprietary software used in Ericsson and developed by Joe Armstrong, Robert Virding, and Make Williams in 1986. It is used interchangeably with Erlang/OTP (Open Telecom Platform) which is a collection of useful libraries, tools, and middleware written in the Erlang and it is an integral part of the Erlang open-source distribution.

Not only in telecommunications, but Erlang is also being used in many industry domains such as Fintech, healthcare, automotive, IoT, gaming, and Blockchain.

Common Lisp is a dialect of the Lisp programming language. It is a general-purpose, dynamic, and multi-paradigm language that supports a combination of procedural, functional, and object-oriented programming styles. Lisp is one of the oldest programming languages and there are many dialects of Lisp that have existed over time.

Being one of the oldest programming languages, Lisp established many ideas in software development. The best-known general-purpose Lisp dialects are Racket, Common Lisp, Scheme, and Clojure.

It supports first-class functions and offers evolutionary and incremental software development. It is widely used in some of the greatest software and systems such as ITA Software, London Tube, Mirai, PWGL, Boeing, Airbus, Yahoo, Grammarly, NASA, Microsoft, and many others.

It is widely used in academia, research, and industrial applications. Haskell functions have no side effects as it is a purely functional language. It offers lazy evaluation, lambda expressions, pattern matching, type classes, type polymorphism, and list comprehension.

Haskell’s notable applications include several world-known systems such as GHC, Agda, Pandoc, Cryptol, Cardano Blockchain platform, Target, Pugs, Xmonad, Bluespec, Linspire, and others. Haskell is a great choice to start exploring what functional programming is. It is mostly preferred for academics and research.

F# is a general-purpose, functional-first, strongly-typed, and multi-paradigm programming language that consists of functional, imperative, and object-oriented methods. It is most often used as a cross-platform (Common Language Infrastructure) CLI language on .NET. It is similar to OCaml with few differences.

It is a member of the ML language family and can also generate JavaScript and GPU code. It has great tooling support, an open-source community, and a rich ecosystem backed by Microsoft and The F# Software Foundation. It is used in a variety of apps from web APIs to data manipulation, data science, machine learning, and interactive programming apps.

It offers functional-first features such as type inference, first-class functions, pattern matching, and object support. F# is a great fit for data science and machine learning apps as it is robust, performant, and fast language.

Clojure is a popular dynamic and functional dialect of the Lisp programming language on the Java platform. Clojure features immutable and persistent data structures and also allows developers to manage identity and states explicitly. This gives developers a big advantage to create concurrent and fast programs.

Rich Hickey created Clojure language with the goal of creating a modern Lisp for functional programming. It supports functions as first-class objects, a macro system, and a read-eval-print loop. It also offers support for lazy sequences, recursion, a reactive agent system, and higher-order functions. The primary platform of Clojure is Java but many other target implementations exist. It is used by many world-recognized companies that include Walmart, Chartbeat, Netflix, Puppet, Circle CI, LinkedIn, Salesforce, Cisco, Boeing, ThoughtWorks, Atlassian, Room Key, Pisano, GO-JEK, Freshcode, LendUp, and so on.

It was created by Evan Czaplicki in 2012. Being a functional language, it supports anonymous functions, functions as arguments, and functions can return functions. It is widely used for front-end web development. Some of the limitations of Elm include a large amount of boilerplate code, no active community, no support for higher-kindred polymorphism and type classes. Elm is used by a large number of companies in production such as Watermark, Basiq, Actcast, GlobalWebIndex, Day One, EXR, Microsoft, Emirates, treefin, NoRedInk, thoughtbot, and so on.

Racket is a dialect of Lisp and a descendent of the Scheme. Racket is a modern, general-purpose, multi-paradigm programming language and a multi-platform distribution that includes the language itself, standard library, IDE, development tools, and a set of additional languages.

Racket is good for exploring ideas and rapid prototyping. It is also used in commercial projects and web applications. DrRacket comes as a self-hosted IDE that is widely used in computer science courses to teach Scheme and Racket. Racket is mainly used for scripting, computer science education, and research.

The core Racket language is popular for its massive macro system that enables building domain-specific languages and language constructs.

Ocaml, Objective Caml is a general-purpose, multi-paradigm language that extends the Caml dialect of ML with object-oriented features. It is a free and open-source project managed and maintained by the French Institute for Research in Computer Science and Automation.

Some of the globally-popular companies use OCaml in their production environment such as Bloomberg, Facebook, Jane Street Capital, GeneWeb, Flow, Hack Programming language compiler, Citrix Systems, and so on. It is as old as Java but it has a very small community and learning resources. You won’t find great libraries and frameworks support. This makes OCaml less popular compared to the other functional languages.

Type-driven development is a notable feature of Idris and helps developers improve the performance and accuracy of the program. It prioritizes the management of side effects and support for embedded domain-specific languages. Code written in Idris is easy to maintain and test.

Idris is known for its state-of-the-art type system which makes it unique.

PureScript is a strongly-typed and purely-functional programming language that compiles to JavaScript. Syntactically, it is similar to Haskell. It has also a set of great features such as persistent data structures, higher kinded types, pattern matching, type classes, and functional dependencies, and higher-rank polymorphism.

It was designed by Phil Freeman in 2013. It is widely used to develop web applications, web servers, apps, and more. It has an active community and excellent tooling, making this language easier to pick by beginners.

Wolfram language is a general, multi-paradigm programming language developed by Wolfram Research. It emphasizes functional programming, rule-based programming, and symbolic computation. It was a part of the initial version of Mathematica in 1988.

Scala is not functional but it supports functional programming and object-oriented programming. The reason we consider Scala for functional programming is, it combines OOP and functional programming in one concise, high-level language. It is a modern, multi-paradigm programming language that runs on top of Java Virtual Machine (JVM). It integrates features of both – object-oriented and functional languages. Scala is statically-typed, extensible, and fully interoperable with Java. Considering the functional level context, it supports many features of Scheme, Standard ML, and Haskell that include lazy evaluation, higher-order types, immutability, pattern matching, and type system supporting algebraic data types, raw strings, and optional parameters. It is used by prominent companies around the world such as Foursquare, The New York Times, Airbnb, SoundCloud, Verizon, Morgan Stanley, Firebase, LinkedIn, Twitter, MeetUp, Coursera, Apple, Walmart, Databricks, and many others.

Python doesn’t need any introduction. It is not functional language but it supports coding in a functional, declarative style. Its design offers support for functional programming through functions, generator expressions, list comprehensions, sets, and dictionaries. It is inspired by Haskell and Standard ML.

It embraces a “there should be one – and preferably an only one-obvious way to do it” design philosophy. It is one of the popular programming languages used for a variety of apps and systems. Python community is the largest one and is considered its greatest strength. It is more commonly used in AI, machine learning apps, a scripting language for web applications, scientific computing, information security industry, and many components are written in Python. Amazon, Instagram, NASA, Google, Yahoo, Wikipedia, Reddit, ITA, Spotify – these are some of the organizations that use Python.

Kotlin is a cross-platform, statically typed, and general-purpose programming language but it can be used to code in functional styles. It is a great choice for exploring functional programming as it offers first-class support for features such as function types and lambdas, higher-order functions, and many more.

It is concise, type-safe, and faster. The Kotlin is easier to adopt as it is 100% interoperable with the Java programming language. Kotlin is used for server-side, client-side web apps, desktop apps, native development, as well as it is supported as a first-class language on the Android platform. It is used by many companies such as Square, Pinterest, Basecamp, Corda, and so on.

Kotlin has a very vibrant and active community with support forums, events, and resources.

JavaScript is primarily a scripting language and it is not widely known as a functional language but it does support functional elements.

JS is high-level, often just-in-time compiled, and multi-paradigm. It supports dynamic typing, first-class functions, and prototype-based object orientation. JavaScript is one of the core technologies of the World Wide Web along with CSS and HTML. Being a multi-paradigm language, it supports event-driven, functional, and imperative programming styles.

It has much in common with Scheme. JavaScript is used almost everywhere in every kind of app and web.