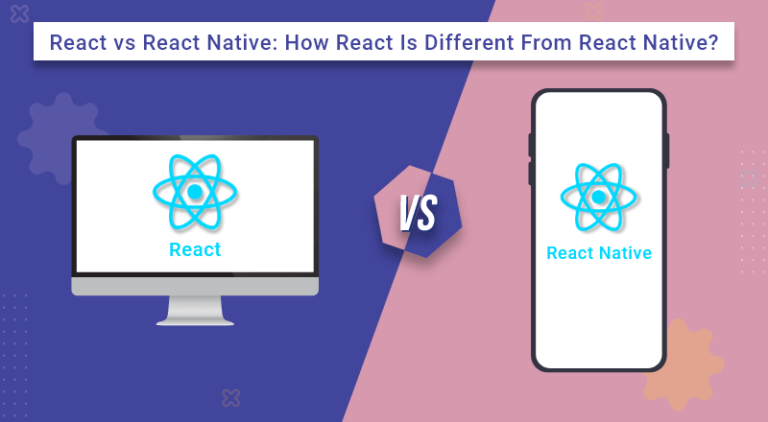 You name it, they have it. React Native has a huge customer base and these success stories clearly show the popularity of React Native.

React Native powers thousands of apps ranging from startups to Fortune 500 companies. React is the most wanted web framework desired by one in four developers. Source: stackoverflow.com

React and React Native both are immensely popular and widely used technologies developed and maintained by Meta and the community (formerly Facebook). While both these technologies have the same names and origins, both are different and used for different purposes.

In this article, we are talking about React Native vs Reactjs and outline the difference in React and React Native.

Let’s start with the introduction of both these technologies.

What Is React JS?

React is also known as Reactjs or React.js.

React is a free and open-source front-end JavaScript library. It is mainly used for building user interfaces based on UI components. React is also used as a base in the development of single-page applications (SPA) and mobile apps.

React was created by Jordan Walke, a software engineer at Facebook. It was open-sourced at JSConf US in May 2013.

What Is React Native?

It is popular for its native development capabilities and cross-platform features that make development faster, easier, and cost-effective.

React Native has been successful at raising the bar for cross-platform mobile app development with its powerful features.

A lot of developers around the world use React Native for native mobile app experiences that are easy to build, scale, and deliver.

Before we begin, let us first clarify the fundamental concept.

React Native is based on React.

One of the key differences between React Native and React lies in its architectural design. React makes use of Virtual DOM. Simplifying this, React makes it easy for the pages to be rendered with subcomponents that are changed or updated.

React Native does not work this way. It doesn’t manipulate the DOM through the Virtual DOM. Instead, it runs in the background process and communicates with the native platform through serialized data over an asynchronous bridge.

ReactJS is a library and not the whole framework. React is fundamentally a JavaScript library to create a smooth, high-performing, and engaging UI layer of an application. It is specifically designed for building a user interface. React Native is the framework and focuses on app development that runs on many platforms.

When we talk about React js and react native difference, animations are on the list. React offers more animations using CSS and JavaScript libraries. React Native, on the other side, depends on API and a built-in library for animation.

React Native does not use HTML tags.https://yoast.com/tag/link-building/ In React Native, JavaScript threads are used to manipulate native views and almost every HTML tag has an equivalent React Native component.

React, on the other side, uses HTML tags. ReactJS renders HTML to the web page by using ReactDOM. It uses JSX, JavaScript XML which makes it easier to write or add HTML in React.

ReactJS makes use of CSS for Styling whereas React Native styling has a similar syntax to CSS for styling elements.

In React Native, you can style your applications using JavaScript and StyleSheet. A StyleSheet is an abstraction similar to CSS Stylesheets.

We have seen how React And React Native are similar and also discussed the difference between React and React native.

Now, let’s see the advantages and disadvantages of both these technologies so you will have a better idea of their usage and applications.

What Are The Advantages of React?

Each framework or technology has its pros and cons. Let’s see the limitations of each.

What Are The Disadvantages Of React Native?

React Native vs Reactjs: Which Is Better?

The answer is quite clear as the usage of both these technologies is different. React is used for building powerful, reliable, and feature-rich web applications, and React Native which is based on React, is used for cross-platform app development.

React and React Native – both power many world-famous applications and are widely used to create modern, scalable web and mobile apps.

React has played a crucial role in the increased popularity of JavaScript for frontend development. It is supported by contributions from individuals and leading organizations around the world.

It is one of the big open-source communities in the development world to make app development faster, efficient, and secure.